Back to Back to the Future

To start off serious: While writing I Wanna Hold Your Hand as well as the BTTF-trilogy, you were confronted with limitations and challenges. Things like The Beatles not being available and the time-paradoxes within the complicated story of BTTF. How do you handle those 'problems'? Do you encounter those challenges while writing or are you aware of them beforehand? And do those problems help you write the script? Does the script improve by them?

That’s an excellent question, very astute!  Bob (Robert Zemeckis, red.) and I believe that having certain limitations forces you to be creative in unexpected ways.  With “Hand,” we knew we couldn’t depict the Beatles in the flesh, so we devised these inventive ways to have them present without ever seeing their faces.  For example, the scene with Nancy Allen hiding under the bed in the Beatles’ hotel room works beautifully because we don’t show them. With BTTF, our budgetary limitations resulted in the Clock Tower sequence.  As you know, we originally had the climax on a nuclear test site in the desert.  But we couldn’t afford to go on location and build everything that was required, so Bob and I had to devise a sequence using a set that wouldn’t have to be built.  We already had the Courthouse Square, so we came up with the idea of putting a clock atop the Courthouse and using the time motif, and the movie is much better because of it. It’s interesting and ironic that having less money resulted in a better film.


We've read that originally the time machine was to be a refrigerator, and Marty needed to use the power of an atomic explosion at the Nevada Test Site to return home. But everybody knows of course that refrigerators are meant to escape from atomic explosions, not to travel in time... You can ask Indiana Jones. And also, according to the story, Zemeckis was "concerned that kids would accidentally lock themselves in refrigerators". How did you get from a refrigerator to the legendary DeLorean?

The time machine was never actually a refrigerator.  It was a time chamber that was the size of a refrigerator, and we discussed putting a refrigerator door on it. As a way of simplification, Zemeckis called it that in an interview, and made the comment about kids, so it sort of became “true.”  In the earlier draft, Doc Brown had to transport it to Nevada on the back of a truck.  At some point, Bob Zemeckis realized it would be easier if the time machine itself was mobile, so that’s how it came to be a Delorean – if you’re gonna build a time machine into a car, why not do it with some style, right?

The new DVD set has an animatic of the original storyboards for the nuclear test site sequence (with the Delorean) so you can see a rough idea of what we had in mind for that – and you can see what inspired Mr. Spielberg for Indy 4.


The Darth Vader scene is great in itself, but it actually was even better as shown in deleted scenes. It is shown that after "Darth Vader" introduces himself, George begins to think it's a dream. Marty replies, "This is no dream! You are having a Close Encounter of the Third Kind! You have reached the Outer Limits of the Twilight Zone!" After threatening George with the hair dryer, Marty's digital watch alarm goes off, and he treats it like a radio, announcing, "Silence! I am receiving a transmission from the Battlestar Galactica!" So who was the scifi-geek who came up with the whole scene? Or did it take a geek gathering to make the scene up?

That was both me and Bob Z. We ended up cutting most of that stuff because it really became the same joke over and over.  It was funny all by itself, but it slowed down the movie when it was put in context. 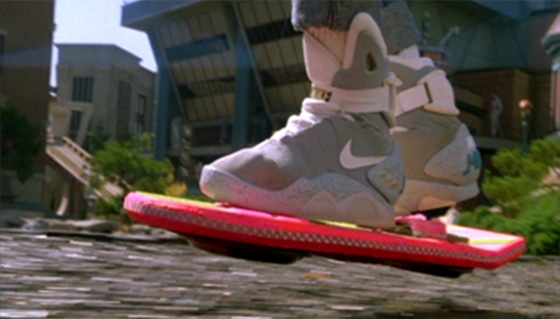 We're five years way from the Back to the Future future, 2015. Until now, we can't really say that 'life imitates art'. Cars don't fly, we don't have any hoover-boards, the Jaws series stopped with part 4 and we still have to tie our own shoelaces! Which of your inventions are most likely to be 'invented' in the next five years do you think?

I doubt we’ll have flying cars or hoverboards, and we probably won’t have pizza hydrators either.  And if there are any fans of U.S. Baseball reading this, I doubt the Cubs will win the world series.  But Nike recently filed a patent for the self-lacing shoe, totally based on the design in BTTF-2.

And we got a whole lot of other stuff right. Rather than me listing everything, take a look at this article.


And to conclude, speaking of Jaws; a lot of 80's movies unexpectedly got a new chapter lately. Die Hard, Indiana Jones, Rocky, Wall Street, etc. Are there any plans for a fourth chapter in the BTTF-series?

Michael (J. Fox, red.) isn’t in physical shape to star in another movie, so the idea of making a BTTF-movie without him is just wrong.  That’s not a movie I’d want to see, much less make.  Besides, too many franchises have gone back to the well one-too-many times – I won’t mention any names – and the results of that have been – to put it politely – disappointing.  Judging from what I’ve seen, it’s virtually impossible to recapture the energy and magic of the earlier films.  So Bob Z and I prefer to leave well enough alone!

Are there ways to make automotive electronics less

The U.S.A.. Guess which has the most repressive attitudes towards sex and sexuality.
Leo lost interest in everything except Fystie and was less than polite in his rejection of the sexual advances of one of his admirers, who then complained of sexual harassment and had him fired from Jezebels Gymnasium.
Id rather you didnt use that door again. There are often people out there wanting to see me and if theyre women and they notice you visiting, tongues will wag and Ill get a reputation as a paedophile. Go into the garden, turn left, keeping close to the building so if anyone in the flats above is looking down they dont see you, then through the gate into the rubbish bin enclosure. Check how to open the gate from the other side so you can come and go as you please, then wander round to the front door as if youve just been putting rubbish in the bins. He nodded dismissively. See you when I see you. He went inside and closed the door before Mort could thank him.
buy cake online I know. I know. I... would you help me to... do it?